A group of mortgage industry lenders and brokers have written a charity single in time for Christmas to highlight increasing homelessness in the UK. 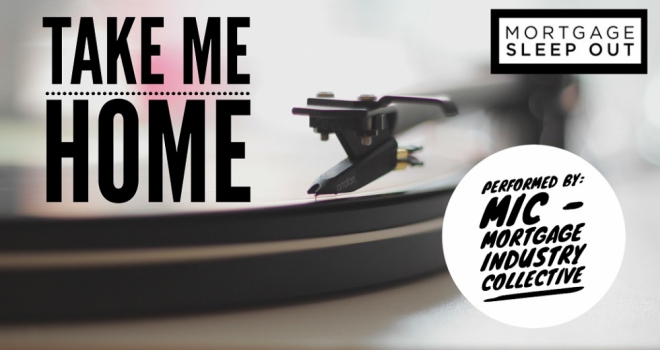 "We spend our lives trying to help people to own and protect their own homes, but we are also all too aware of the growing issue of homelessness in the UK."

The song, “Take Me Home” is the brainchild of Landbay's Paul Brett and Coreco's Andrew Montlake and is about being homeless at Christmas.

Performing under the name MIC (Mortgage Industry Collective), Paul and Andrew are joined by Kit Thompson (Brightstar), Howard Levy (SPF) and Andy Rowe (Computershare) and are looking for singers in the industry to attend the recording session.

The single will be recorded at a Band Aid style event on the 1st and 2nd of December at producer Benny Di Massa’s famous Powerstudio in London.

The project has also had assistance from musical director Jenny Deacon who has worked with choirs at The Royal Albert Hall, The O2 and Wembley Arena.

The single will help to raise money for Mortgage Sleep Out, which will see more than 1,000 people from the industry sleep outside for a night on 30 November at different locations across the country to raise money for the national charity, End Youth Homelessness.

If you would like to be part of the industry movement to eradicate homelessness, you can register now and receive your guide on how to arrange a Sleep Out at www.mortgagesleepout.com or donate to the main Just Giving page at www.justgiving.com/campaign/mortgagesleepout.

Andrew Montlake said: “Paul and I first started to discuss the idea of a song a couple of years ago as we knew there were so many talented people in our industry who could contribute to such a project. We both wanted to do something that would show the public what the mortgage industry was all about. We spend our lives trying to help people to own and protect their own homes, but we are also all too aware of the growing issue of homelessness in the UK.

“I initially wrote the lyrics on a late journey home one evening and tried to imagine what someone without a home would be feeling at this time of year. It’s about the thin line of life events that could see any one of us end up in such a position and how we need to all work together to help and change the reality of life on the streets.

“Paul has done a fantastic job with the music and after experimenting with several genres, the version we have now conveys the positive and uplifting feeling we wanted to achieve. We now want to get as many industry people as possible to help sing on the track.”

Paul Brett commented: “During my many years in the mortgage industry, I have been privileged to meet some incredibly talented people and not just from a business point of view, there are incredible musicians and artists working in our fantastic industry across the UK and we want to bring as many of those as we can together, to showcase what we can do and help the fund raising effort that has been started by Mortgage Sleep Out. Come along and be part of the choir, and record with a legendary record producer. See you on the 1 and 2 of December!”

Rob Jupp, CEO at Brightstar, added: “The idea of Mortgage Sleep Out started in August, when I tweeted about the shocking number of ‘rough sleepers’ on the streets of London. Maria Harris, director of intermediary lending at Atom Bank, replied to the tweet and suggested we do a financial services sleep out to raise funds and awareness. We now have more than 1000 people taking part and this charity single is a fantastic initiative that will really help to boost fundraising.”