What happens when you get a job in London, but the country you reside in is in full and total lockdown? 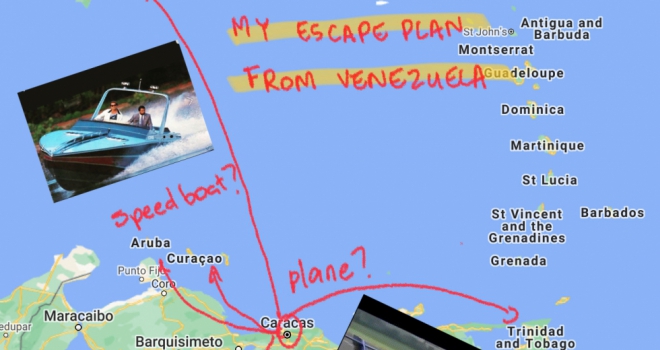 "Leaving Venezuela was only the first leg of a three-day journey that would take me to my new life in London."

Valeria, an investment banker for the past eight years in Venezuela, had secured a job with Fiduciam as senior underwriter, but getting to London was going to be an ordeal. Even though she had valid reasons for leaving the country the only way to get out was through humanitarian channels. Here’s her story...

I picked up the pace in my walk as if I felt the military officer’s breath on the back of my neck. I tried glancing discreetly over my shoulder so that my movements would not raise any alarms. No one was there. I felt like a fugitive, as if I had been fleeing with State secrets in my bag rather than the allowed 23 kg of personal items. The process of escaping Venezuela during quarantine felt like a Hollywood action thriller.

The constant interrogations combined with biosecurity measures dragged out the migration process at the airport longer than usual. While queuing, I briefly broke social distancing to eavesdrop on the conversations of fellow travellers. They all shared personal horrible travel experiences as well as those heard through the grapevine. My anxiety level rose as this gossip fed all the different scenarios that could abruptly end my escape plan.

My mind drifted to making a mental inventory of all the documents I needed to have on hand just in case one of the dreadful scenarios popped up. I was asked for my motive for travelling and all the information that supports it. I was even asked for my teddy bear’s travel documents.

The airport was a mix of anxious travellers, airport officials in hazmat suits, and military officers whose rifles got in the way while viewing all our passports. Nothing too different from the ordeal I had just faced on the ride to get to the airport. The roads in Caracas, and especially those towards the airport, were seized by multiple checkpoints with police and military men safeguarding them, hindering my ride there.

Finding a ticket was an ordeal by itself. Venezuela is, to this day, still under strict lockdown. No incoming or outgoing flights were allowed, with exceptions made for humanitarian travels only, that is for foreign residents trapped in the country or people, like me, with valid and documented reasons to leave. Finding a ticket in the short term was a tough, and a potentially very expensive task. I must admit I contemplated traveling on a speedboat to nearby Curacao or Aruba, driving through the Colombian border, or boarding a small twin-engine flight and flying to the Dominican Republic or even Trinidad and Tobago. Thankfully, because I fit the criteria (in fact I had two valid reasons, a job in London and I’m an Italian resident) a skilful travel agent found me a ticket on a humanitarian flight.

Leaving Venezuela was only the first leg of a three-day journey that would take me to my new life in London. The humanitarian flight would take me to Mexico, with sadly no opportunities to visit a local beach as I was arriving late and leaving early the next day towards Miami. No opportunities to visit a local beach there either, as I would only be there for four hours before connecting to London. For Venezuelans, sun tanning is very important.

After a three-hour flight, we arrived at an undisclosed Mexican shantytown. Mexico greeted us with hot humid weather and complimentary beverages in the hotel, which I was advised not to drink due to foreign bacteria in the water. I had already survived the first leg of my journey, so I felt adventurous and drank it anyway.

Eight hours later I found myself again in the hotel lobby with my bag – no tea this time – waiting for the cab that would take me to the airport. The airport felt alive, with people shopping in the duty-free shops and grabbing a bite before boarding their planes. It seemed that life was, indeed, compatible with coronavirus, a scene very different from the one in Caracas.

The actual flight to Miami took about a third of the total amount of time I had to wait at Miami airport. After a Starbucks latte (a must for Venezuelans as soon as they touch foreign lands), I could finally breathe in relief as I saw my plane to London was on time. Well, breathing is a stretch when considering I had been exhaling and inhaling into an N95 facemask for the past 11 hours or so, plus 18 hours the day before.

Finally, at 7.00 pm EST, I was boarding my last and final plane to London. Thankfully, tailwinds cut off about an hour of traveling time, time which I wasted dragging my 23 kg bag (which, most be noted, felt like it weighed half a ton) up and down Abbey Road trying to find my friends’ flat. A warm welcome, a full meal, and a nap later I could finally say “I made it safely to my new home”.

Moving to London took me through two different countries for three days, an ordeal fit for an article but with the sweetest of rewards: becoming part of the Fiduciam team.