The first Women in Specialist Lending Event (WISE) took place at the beginning of this month. 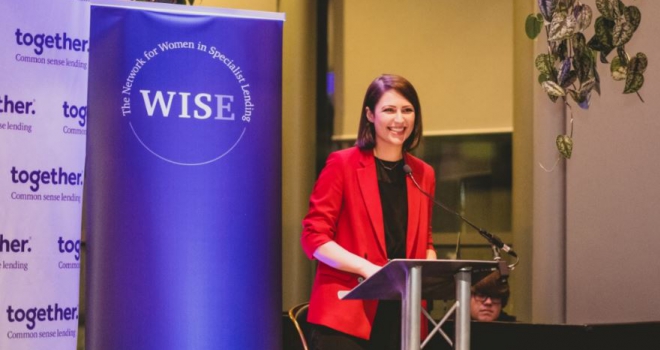 "Female focused networking groups are essential if we are going to see equal gender representations at all levels of the industry."

Actor and campaigner Nicola Thorp urged businesswomen to “make space” to empower themselves at an event to unite women in specialist finance.

She was speaking at the first Women in Specialist Lending Event (WISE), sponsored by specialist finance firm Together, which took place at the beginning of this month.

She said: “It’s about making space and not taking space, making the workplace truly diverse and equal”. Nicola said this could only be achieved through even more women championing their own talents and abilities – and recognising each other’s achievements.

The former Coronation Street actor and campaigner for gender equality hit the headlines in 2016 when she revealed she’d been sent home without pay for refusing to wear high heels.

The event, funded by Together, is the first in a series of networking opportunities to champion women’s contributions to the industry. WISE was set up to encourage personal and career development among likeminded specialist finance leaders.

Nicola was joined on the panel by other industry figures including Fiona Hoyle, head of consumer and mortgage finance at the Finance and Leasing Association, Debbie Burton, CEO at lender Central Trust, Suzanne Richards, Manchester City Council’s member for housing and regeneration, and Joanna Kingston-Davies, COO at solicitors Jackson Lees Group.

Following the discussion, Nicola said: “I was keen to get involved with the WISE launch, especially in light of this month’s International Women’s Day, because I see it as a fantastic opportunity to recognise the achievements of women within the specialist lending sector. It was a wonderful event that addressed issues and concerns faced by women.

“Female focused networking groups are essential if we are going to see equal gender representations at all levels of the industry.”

Tracey Bailey, head of lending transformation at Together, added: “We had a fantastic turnout for the WISE launch and the feedback has been greatly positive. Our vision is to grow the initiative as wide as possible and support each other, personally and professionally, through an inclusive networking community - creating more opportunities for women in specialist lending.”